I arrived in Florence on Sunday 29th May. I haven’t mentioned food yet! Well, I had an exquisite omelette: very thin but very cheesy with rochet and (more) grated cheese added on serving – delicious. I sat in the loggia in the Piazza della Signoria, surrounded by renaissance and classical statues and listen to a Polish busker play Spanish guitar music to great applause. Oh, the Villa-Lobos! 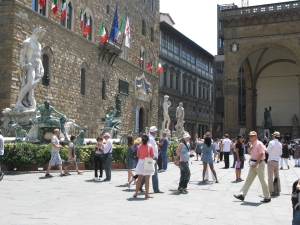 On the other hand, here are the peaceful cloisters of Santa Croce. 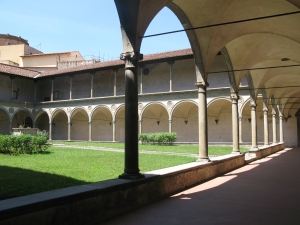 Florence has been a feast. I have been staying in a convent about eight minutes walk (even for me!) from the Duomo. On Tuesday I spent several long-anticipated hours in the Uffizi gallery. I worked my way through the forty or so rooms of paintings, though I skipped much of the classical statuary. It was an integrative experience – things fell into place as I saw works which previously I had only known from books being juxtaposed according to period and artist.  I think my enthusiasm began to wane after about 1570 – not so much from exhaustion as that I found the Mannerist and later paintings less appealing – until the two Rembrandt self portraits just before the end.On Wednesday I visited four churches and  a library (see my blog ‘Looking up’) and somehow seeing the art in a religious context, rather than in a gallery, seems to make quite a difference to the attention I am able to give some paintings. On Thursday I promised myself a day of painting. I made an early start and crossed the Arno in time to photograph the Ponte Vecchia bathed in morning light and casting reflections around a single oarsman.

I then climbed even further up to the church San Miniato al Monte which the guidebook describes as ‘one of the most beautiful Romanesque churches in Italy’. It was stunning with its vaulted crypt soaked in prayer, its high vaulting, marble-faced arches and – yes – its frescos and mosaics. The organist was practicing I’ll be generous) and the 32 footers were belting out a Bach Toccata. Quite a multi-sensory experience. And then I turned around and looked through the church door…

This was all the starter – main course was yet to come. I retraced my steps back down to Palazzale Michelangelo and sat on a step for four hours and sketched and painted. Across the square there were some Andean musicians playing their flutes and other instruments and I watched the scene change as the sun moved from east to west – first the Duomo was lit from the right, then from above and then, gradually from the left. After a slow watercolour of the Duomo, I swiveled left and ran off a quick sketch of the Ponte Vecchio. Rough and ready – but it captures something of what I saw and I enjoyed the freedom of  being more impressionistic than exact – now that’s in character! The palm trees in the foreground would have seemed out-of-place if it wasn’t for the heat. Then it was time for a very very late lunch (which included a kind of cheesy rice pudding as a primo, followed by lamb chops grilled with rosemary and lemon mmm). Somehow the steps aren’t nearly as step, or as many, going down….

If you want to see more of my artistic endeavours then have a look at Wecome> Chris’s Italian Sketchbook or Gallery>Art.