I decided to keep Assisi until last and it was clearly the right thing to do. Assisi is extraordinary.

From a tourist point of view Assisi is a medieval hill town complete with walls, alley and views. Lots of atmosphere – lots of ambiENCE – as Delboy would say. Very picturesque and a photo opportunity around every corner.

From an artistic point of view, Assisi is special because the basilica built in hono

ur of St Francis is full of medieval masterpieces – frescos by Giotto, Cimabue and Lorenzetto, amongst others.

And then Assisi is a place of pilgrimage, focused on the life and inspiring example of Francis, but also with a strong supporting cast of St Clare and his early companions such as Rufino and Leo. This theme of pilgrimage is built into the very architecture of the basilica. Not only does the crypt offer pilgrims the opportunity to pray at the tomb of the saint – or to reflect prayerfully on his example – but the external colonnades offered shelter to pilgrims who had walked for days and who could not afford lodging.

What has intrigued me about Assisi has been the effect it has had on the people who have come. Admittedly I went to the main churches, the basilica of San Francesco and the basilica of Santa Chiara, fairly early in the morning before the crowds of tourist buses arrived in force. But still in each place there was a sense of respect and reverent prayer and reflectiveness which I have not seen in any other tourist church – anywhere.

I found myself saving for my last day a return to the basilica of San Francesca. The first time I had come as a pilgrim and spent time in the crypt and before some of the works of art. The second time I had downloaded a tour guide to the church on to my iPod and this made me go around slowly, thoughtfully and relatively comprehensively. But even this second time I kept being drawn back to a painting which had stopped me in my tracks on the first visit. There was strictly no photography in the church so this image is of the internet. 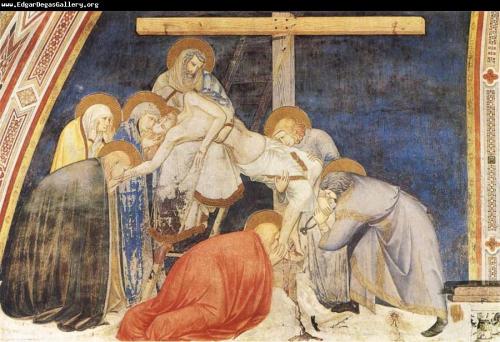 Situated in the left transept of the lower church, this is a representation of the deposition, the taking of Jesus’ body down from the cross, painted by Pietro Lorenzetti early in the fourteenth century. Art historians will tell you that it is significant because it is an example of those works which broke through the medieval conventions which had been  influenced by Byzantine iconography. Instead of stylized images we have figures who interact with one another, a precursor of the humanism of the Renaissance.

That’s fine as far as it goes. But this work hit me between the eyes – or, rather, touched me at a deep level of common humanity and spiritual devotion. look at the people who crowd around the dead body of Jesus. Their grief is not just the ending of their dreams, but the loss of someone they love mofre than  they can say. their grief is tactile,as they cling tenderly to what remains of their Friend and Master. In the foreground, in red, is Mary Magdalene, kissing the foot she had so recently anointed with oil and washed with her tears of repentance. Standing, in blue, is Mary the mother of Jesus gently caressing his cold cheek with her own, just as she may have done when he was a babe in arms. John, the beloved disciple, shares the weight of the corpse – but this is no mere burden to carry, but a beloved friend to be cared for. But the fresco is far more than ‘just’ a portrayal of human grief. It is a representation of human devotion and it drew me into its spiritual response to God’s love in Christ. Here are friends devoted to Jesus. They cradle him lovingly and respectfully. Their tactile affection invites us to respond to this Jesus not simply with the language of faith or the vocabulary of discipleship – but with a  movement of the heart, with an adoration born of love and longing.

It was a sense of pilgrimage that took me on the long, steep climb up Mount Subasio to the hermitage where Francis and his early companions used to go for periods of prayer. Built kin the wooded cleft of a ravine the present buildings enclose places where Francis would sleep and pray. There is a deep tranquility and in the surrounding groves, groups of tourists would fall silent and sit reflectively or prayerfully as the place seemed to enshrine the spirit of this gentle saint. Here is a watercolour sketch of the monastic buildings.

Saint Clare left her family and followed the example of Francis at the age of eighteen. She outlived him by many years but her own example of prayer and her deep devotion to God led to her being canonized very soon after her death. The Basilica di Santa Chiara is in her honour and is a place of serenity an

The Crucifix of San Damiano, a sketch

devotion. The chapel which houses the crucifix before which Francis was praying when he heard the call of God is a house of prayer, deep and still. A place where people can reflect on the costly discipleship of Francis and Clare and the call of God on our own lives. the crucifix can be found in all the tourist shops from minute ones for a few cents to huge ones for hanging in churches. It’s the kind of symbol or logo of a visit to Assisi. But still it portrays both the grace of God who comes to us in Christ and offers us redemption, and it portrays the invitation of God to respond to his call on our lives.

From the piazza outside St Clare’s basilica there is a fine view across the town taking in several churches and plenty of Umbrian roofs and trees. I had a go at a watercolour sketch. I have found that whenever you sit down and start painting you end up with conversations. This time it was a young Croatian man who engaged me in conversation about Assisi and what it means. I ended up on more than one tourists video record of their trip to Italy and I’ve guiltily wanted to say, I;m not part of the local scene – I’m just a tourist like you!’ Yet the local scene includes the people who come and, in Assisi at least, many of those come as tourists but leave as pilgrims. 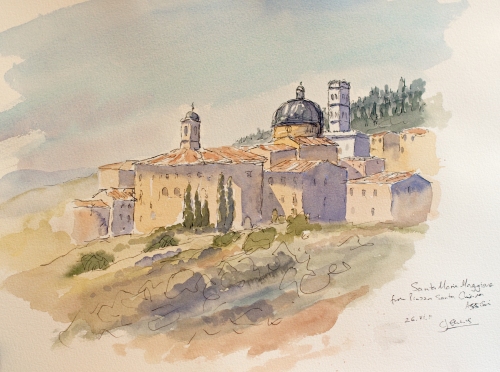